In the Good Old Days of Hollywood is hosting a Bette Davis Blogathon and I'm delighted to be contributing this post on the 1935 drama Dangerous starring Bette and Franchot Tone. Bette's performance garnered her first Academy Award for Best Actress.

I've yet to uncover Franchot's thoughts on the making of the film or his costar, but Bette talked about Franchot in her book, This 'n That:


"When I was filming Dangerous in 1935, I had a crush on my costar, Franchot Tone. Everything about him reflected his elegance, from his name to his manners. He had a great deal going for him, including Miss Joan Crawford. He was madly in love with her. They met each day for lunch. After lunch, he would return to the set, his face covered with lipstick. He made sure we all knew it was Crawford's lipstick. I was jealous, of course."

Although I have no record of it yet, I imagine that Franchot would've been very proud of this film and enjoyed the experience of working with the dedicated and immensely talented actress.

In the film, Bette Davis plays Joyce Heath, a young alcoholic who was once considered a rare talent on the stage. Distant, demanding, and in debt, Heath's only recent public performances have played out in seedy bars and busy streets. To the public, Heath has become somewhat of a punchline and on stage, her name is all but poison.

Having been greatly moved by her performances, wealthy architect Don Bellows (Franchot Tone) credits the actress with inspiring him to pursue his own dreams. When he learns of her fall from grace, Bellows is determined to prevent Heath from further self-destruction. Although he is engaged (to Gail, played by Margaret Lindsay), Bellows falls in love with Heath hard and fast.

Franchot may have only had eyes for Joan Crawford offset, but once the director yelled action, he transferred all of that passion and dedication into his relationship with the fictional Joyce Heath. Bette and Franchot's romantic chemistry is through the roof in this film! It is completely undeniable. You can witness the characters' attraction to one another in every glance, word, and movement. Dangerous is an enormously romantic film. Both Bette and Franchot look absolutely flawless in their close-ups and beautiful as a couple, and the way Bette is styled (in hair, makeup, and clothing) remains my favorite of her onscreen looks.


Need more proof of their sex appeal as an onscreen couple? Look at the way they gaze at each other in these scenes!

On Bellows' secluded farm, Heath weans herself off alcohol and expresses a desire to return to the stage. Because of her reputation, no producer will hire the fallen actress. The smitten Bellows (who has ended his engagement) puts up the money himself to produce the play of Heath's dreams. Their romance and Heath's comeback are moving along marvelously and then Bellows asks Heath to marry him. And everything suddenly changes. Secrets are exposed, feelings are both concealed and hurt, and both Bellows and Heath are put to the test. The "Joyce Heath curse" that Bette's character has been warning him about threatens to destroy everything that Don Bellows has attempted to repair.

Bottom line: Watch this movie immediately! If you've already seen it, watch it again. It's brilliant! Full of sacrifice, drama, and passion, Dangerous will completely envelop you and not release you until long after the end credits have rolled. It is that good.

Reviews:
"One of the most satisfying screen dramas of the past month, and one that is bound to win new admirers for Bette Davis and Franchot Tone...Their relations and what happens to their lives makes highly interesting and intelligent screen fare."-Modern Screen

"A fresh love pattern that sweeps through your heart like a warm summer breeze...Tone and Miss Davis, holding the prize roles, turn in magnificent performances..."-Hollywood Magazine

"What a picture!...Her ability to run the gamut of emotions is remarkable. And Tone gave a very fine performance."-Motion Picture Herald

Last year, I posted a brief summary and many screenshots of Dangerous. You can view those film captures here.
For a celebration of Bette Davis, view the full roster of blog posts in the Bette Davis Blogathon. 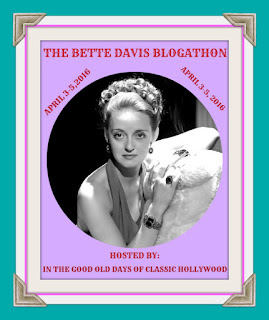 Unless otherwise noted, all images are my own scans from my collection or screenshots. All film summaries are my own.

Thanks for stopping by! :)